Featured Blogger:
Kayla of "One Breath at a Time" 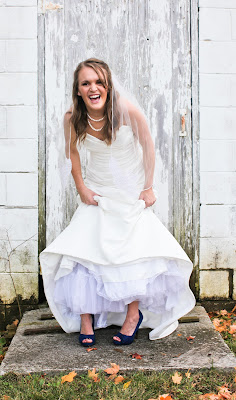 If you'd like to be a Featured Blogger, leave a comment or e-mail beingcindybaldwin AT gmail DOT com, and we'd love to feature you! Don't forget to include your e-mail address so that I can send you a list of interview questions. (Currently, I am posting the interviews in the order that I receive them, so don't be worried if it takes a few weeks for your interview to go up.)

Today's Featured Blogger is Kayla of "One Breath At A Time." I "met" Kayla through the CF Blogroll and am excited to be able to feature her today! Kayla began her blog as a way to help keep herself accountable for her health, and she is a great example of determination and courage. Don't forget to pay her blog a visit!

First, tell me a little bit about yourself!

Hi! I'm Kayla, and I'm 25 years old. I'm married to my best friend, Eldon. We don't have any children yet, but we do have dreams of having at lest one in the future. I am currently a 4th grade teacher, and I love my job! I'm working at my dream school in my ideal grade level!

How old were you when you were diagnosed with CF? What led to your diagnosis?

I was 6 years old when I was finally diagnosed with cystic fibrosis. As a kid, I was extremely active which kept me from having a lot of the symptoms that normally exist in your lungs. I was constantly having issues with my digestion though. We went through 3 pediatricians who just told my mom that I was sickly, and she was worried about nothing. She was just being an overprotective mother. The last pediatrician got an idea, and tested me for CF. Sure enough, I had it, and we began seeing a CF specialist right away.

What kind of effect has CF had on your life?

I like to say that I don't let cystic fibrosis run my life, but it really does affect in in many different ways. For me, the biggest struggle has always been staying compliant with my treatments. They are a time commitment that I have not always been willing to make. When I was younger, my friends would all be outside playing, and I would have to come in to do my treatments. In high school, I had to work my treatments in around my busy schedule. When I got to college, I did my rebelling. No, I didn't go out partying or drinking or smoking. I just stopped doing my treatments and continued being non-compliant throughout my college career. It wasn't until I was threatened with the possibility of a lung transplant at age 22, that I decided to turn things around.

Other than the treatments, I do not let CF stop me from doing what I want to do. I cheered and tumbled, was a Young Life leader, and became a teacher. I set goals for myself, and I work hard to meet them. I have signed up for two 5K's this year so far, and I have started training for them. I have set goals for my PFT's as well. Not to mention, I plan on have a child at some point in the future. I live my life the way I want to live it.... with the added treatments, doctor's appointments, and everything else that come with CF.

I started my blog in 2011. In the fall of 2010, my lung function had dropped to 34%, and my doctor told me that it was time to start thinking about a lung transplant. I was not ready for that, so I worked hard to stay compliant with my treatments and workouts until I went to Vanderbilt for tests to decide whether I was a candidate. My lung function was up to 57%. That following January, I decided to start the blog to hold myself accountable. It was a way to share my experiences with CF without having to talk about it all the time. It then kind of morphed into a way to raise awareness and a way to fund raise as well.

Man of my Dreams is probably my favorite, because it is all about my best friend and how blessed I am to have found him. Those of us who have cystic fibrosis know that it's a lot to deal with, so when you find someone who is so willing to take that on with you, it's an wonderful thing!

What are a few of YOUR favorite CF blogs? (They don't have to be on the blogroll.)

I follow so many CF blogs now that it's hard to choose my favorites. I guess my favorites boil down to which blogs I read the most. I highly recommend these blogs. They are all upbeat and educational! :)

Run, Sickboy, Run
Live, Laugh, Love, Breathe
I have CF, but it will never have me

What would be your #1 piece of advice to others with CF?
Don't let cystic fibrosis run your life. Yes, it is obviously a big part of your life, and it is going to control certain aspects of your life. But don't let it be a deciding factor for the things you want to do. Don't let it take away your dreams. My doctors were not all that happy about be being a teacher (germs everywhere), but I did it anyways because I knew that I was made to be a teacher. I cheered in middle and high schools, and I never used CF as an excuse for why I was struggling with our workouts. Live you life the way you want to live it, not the way CF wants you to live it.

Posted by cindy baldwin at 7:00 AM